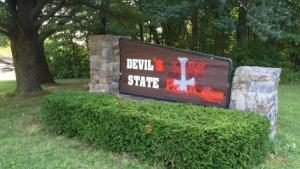 A 16-year-old girl from Onalaska faces charges for allegedly spray painting satanic symbols and other graffiti on signs at Devil’s Lake State Park near Baraboo.

The Sauk County Sheriff’s Department says the teen, who was vacationing at the park with relatives, has been referred to juvenile officials for the damage discovered in early August. Satanic symbols and other messages were found spray painted on structures and road signs in and around one of the state’s most popular state parks.

Sheriff’s officials says tips from the public helped solve the case. It’s unclear at this time if additional suspects could face charges.