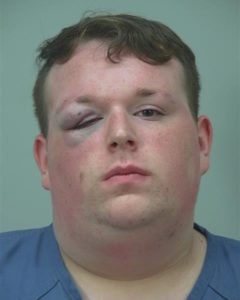 A Madison man is charged with vandalizing a Minnesota Vikings lawn display – and stabbing the homeowner. Twenty-one-year-old Jacob Justice is due back in Dane County Court next week on a charge of second degree reckless injury.

The Vikings have shown Moschel support, inviting him to attend their home game against Arizona on November 20th and a team practice.