You are here: Home / Crime / Courts / Suspect charged in deaths of Oneida couple 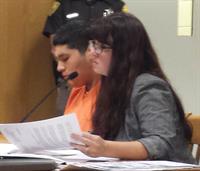 Prosecutors are revealing more details about the deaths of an elderly couple in Oneida last month. Nineteen-year-old Vance Reed of Oneida was charged with two counts of first-degree intentional homicide in Outagamie County court on Monday.

Assistant District Attorney Melinda Templis said Reed lived near the victims, 77-year-old Harry Brown Bear and his wife, Lorraine, and he stopped by their house on September 7th.

Templis said Reed was drinking with the couple, and got into an argument with Harry. She said Harry Brown Bear’s Reed throat was slit and, Lorraine was stabbed.

The bodies weren’t found until a week later, when neighbors called police because they hadn’t seen the couple recently.

Investigators said they found several blood stains in the house that did not match the Brown Bears, and DNA tests showed that they belonged to Reed.