You are here: Home / News / Biden binds Johnson to Trump at Madison rally 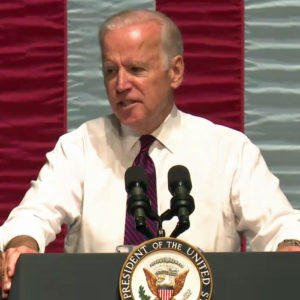 Vice President Joe Biden worked to link Donald Trump with U.S. Senator Ron Johnson during a Democratic get out the vote event in Wisconsin on Friday. “These guys are from the same policy perspective. They seem to be carbon copies of each other,” Biden told the crowd at downtown Madison’s Orpheum Theatre.

Johnnson, the Republican who’s locked in a tight reelection contest with Democrat Russ Feingold, made his very first appearance with Trump just this week. Biden noted that Johnson and Trump have been dubbed “Ronald and Donald” during the campaign.

Biden referenced his own foreign policy expertise when talking about Trump. “As a consequence of what he doesn’t know, what he thinks he knows, and the way he’s demonstrating his character, he is thoroughly unprepared and unqualified to be the commander in chief of the United States of America.”

Biden spoke for about 45 minutes, urging supporters to get out and vote for Feingold and Democratic presidential candidate Hillary Clinton. Friday marks the last day of in person absentee voting in Madison and other locations around the state.

Figures released by the Wisconsin Elections Commission on Friday morning show 685,644 absentee ballots have been returned to local clerks so far, out of 722,193 requests. The number breaks the record set during the 2012 presidential election, when just under 665,000 absentee ballots were cast during the entire election. Of the ballots cast through Friday morning, 546,463 were cast as in-person absentee.

The Biden rally came two days after the release of the latest Marquette Law School Poll. The poll showed Clinton with 46 percent of likely Wisconsin voters backing her, and 40 percent saying they plan to vote for Trump. Feingold, who Johnson defeated in 2010, was ahead of the incumbent by a 45-44 percent margin. The U.S. Senate race had just a two point gap, at 46-44 percent, in a poll released in mid-October.