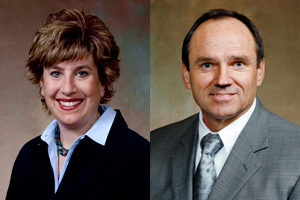 Republicans continue to keep a close eye on vote totals in the 32nd state Senate District, where their candidate lost by only a handful votes.

Senate Republican Leader Scott Fitzgerald says GOP challenger Dan Kapanke is watching to see where things sit after the canvass is completed next week. So far though, he says “nothing significant” has really changed the outcome race.

If the margin of victory is less than a quarter of a percent, Kapanke can request a recount at no charge to his campaign. Fitzgerald says that’s a decision Kapanke, who previously served in the Senate before losing to Shilling in a recall election, will have to make on his own.

Fitzgerald notes there may be as many 100 provision ballots still out, which must be verified by Friday before they can be counted. “It’s another reason to just kind of go through the whole canvassing process and see where you end up,” he says.

If Kapanke were to end up defeating Shilling, it would give Republicans a 21 seat majority in the Senate.