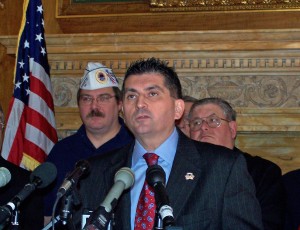 Governor Scott Walker announced Wednesday that Scocos will step down on January 7th from the post he was appointed to in 2011, after lawmakers took away the Veterans Affairs Board’s authority to hire the secretary.

Scocos held the post from the 2003 to 2009, when the board fired him for spending decisions made without the panel’s input. He then sued the board and won a $325,000 settlement, claiming he was wrongly let go just two months after he returned from tour of duty in Iraq.

His resignation comes as the Veterans Affairs agency is the focus of a legislative audit, sparked by allegations of poor conditions at the state veterans’ nursing home at King in Waupaca County. Scocos has defended the facility, saying it received high marks from the federal government.

In announcing the resignation, Walker called Scocos a “tireless advocate,” citing a long list of accomplishments in helping state veterans.