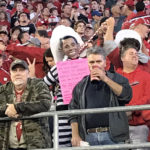 UW-Madison has revoked the season tickets of a pair of Badger football fans who dressed in costumes depicting a noose around the necks of President Barack Obama and Hillary Clinton during a football game last month.

Chancellor Rebecca Blank told the UW-Madison faculty senate on Monday that the tickets were revoked because of violations of Camp Randall stadium policies and not following instructions from stadium staff.

The as yet unidentified fans’ attended the October 29 game against Nebraska. One wore masks of Obama and Clinton and dressed in prison stripes with a noose. A second fan wore a mask of Donald Trump and held the other end of the rope.

Blank also apologized for the UW’s initial response to the incident, panned by critics as inadequate.