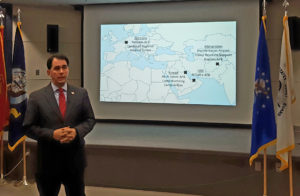 While there have been tremendous improvements in the country, Wisconsin Governor Scott Walker says there are many dangers still facing U.S. troops who are serving in Afghanistan.

Walker was part of a delegation of other governors who traveled to the Middle East last week to meet with National Guard members stationed overseas. The trip, organized by the U.S. Department of Defense, included stops in Germany, Kuwait, United Arab Emirates, and Afghanistan.

Recounting the trip for members of the media on Monday, the Republican governor said a lot of people assume that things are quieting down due to the impending draw-down of U.S. forces from Afghanistan. He said there is a “night and day difference” in the country, compared to before U.S. forces launch an offensive in 2001. Those include changes in the economy, quality of life for residents, educational opportunities, and more women entering the workforce.

However, Walker said it’s still a very dangerous place for members of the military and civilians. He said the governors were moved around by helicopter, while wearing flak jackets and helmets, because convoys are still regularly attacked with improvised explosive devices (IEDs). “It just shows you how real it is,” Walker said.

Citing that danger, along with the need to combat terrorism in the region, Walker also signaled support for the U.S. maintaining an ongoing military presence in the Middle East. He compared it to military bases in Germany and Japan following World War II, and the need to keep terrorist groups from taking hold again. “I’d prefer to have those fights taken on in places like Afghanistan, not here in Wisconsin or anywhere else,” Walker said.

Walker said he believes the trip served as a morale boost for those serving overseas, since it shows there are government officials willing to come and see what U.S. troops are going through. He said it also provided him a first-hand look at the work being done by Wisconsin National Guard members. “It’s really important to see what they’re doing, to understand that, to appreciate that,” the governor said.