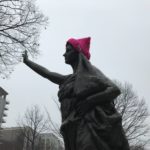 There was a massive crowd for Madison’s Women’s March on Saturday. Madison Police tweeted an estimate of between 75-and-100-thousand people on a day when huge crowds also gathered in other U.S. cities.

At one point the crowd stretched all the way from the Capitol to the Libary Mall. The crowds were the largest since the Act 10 protests of 2011, a fact alluded to by Madison Mayor Paul Soglin: “Governor Walker, they’re back!”

Police reported no significant problems or issues, and also tweeted “thanks all for being peaceful.”