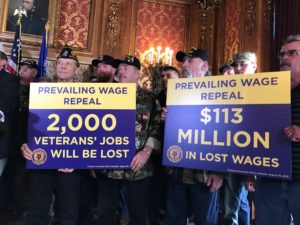 The Wisconsin American Legion hopes to prevail on Governor Scott Walker. Leaders and rank-and-file members were at the Capitol on Wednesday, pushing back on the governor’s budget proposal to repeal the state’s prevailing wage law.

State Adjutant David Kurtz said the Legion will keep advocating for veterans programs. “But we’re also here because of jobs. We’re going to stand together, because it does affect individuals and their families,” Kurtz said.

Proponents for repeal of prevailing wage claim it will save money on taxpayer-financed construction projects. The Legion claims it would disproportionately and unfairly impact veterans in the construction trades, citing research that some 2,000 jobs could be lost in Wisconsin.

State Commander Daniel Seehafer said the governor was always been a great advocate for Wisconsin’s veterans. “But withdrawal of this repeal would even be better for us, for all veterans. And we encourage him to stop this,” he said. “We’re hopeful that he looks at the situation in its whole total, the veterans will have a friend in friend in Governor Walker,” said Kurtz.

“No one has served as a greater champion for our veterans than Governor Walker over the last six years,” said Walker spokesman Tom Evenson. “This reform is expected to increase efficiencies and reduce costs on taxpayer-funded projects. Reducing costs will allow the state to continue investing in projects and programs that will create jobs for all workers, including our veterans.”