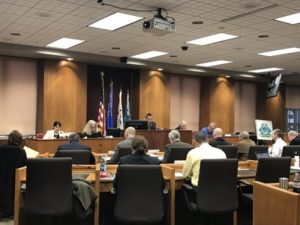 Despite some strong opposition, Green Bay Mayor Jim Schmitt will keep his job.

In a special meeting that lasted over 4 hour hours Monday night, the city council voted 8-4 to remove Schmitt from office – falling one vote short of ousting him. A three-quarters majority vote would have been needed.

The attempt to remove Schmitt follows his conviction on three misdemeanor counts for improperly accepting and reporting campaign donations. The court also considered another 34 violations when he was sentenced in December.

Petitioner and Green Bay resident Scott Vanidestine spoke at the meeting, stating his reasons for wanting to strip the mayor of his title. “This is not a case of a couple of simple errors. It’s a case of 37 violations that show the intent to deceive,” Vanidestine said.

The city council spent two hours in closed session before coming back to vote on whether there was cause to remove Schmitt from office and then the failed vote on his removal.

Alderman Chris Wery voted in support of removal, and said they now have to look forward after the effort fell short. “Well, obviously disappointed. I think a case was made and you heard the vast majority, 8 out of 12 people speak for various different reasons all across the spectrum for removal.”

As for Mayor Schmitt, he plans to finish his term as mayor and if there is a recall election, he will run. “To face a recall, it’s very difficult and it’s not something I want to do but again I’m going to do what’s best for Green Bay,” he said.