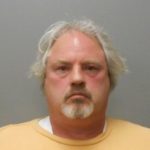 Baxter’s attorney Ashley Morse argued that a signature bond would be appropriate as he only has one misdemeanor on his record. Court Commissioner Stephen Meyer disagreed and set bail at $30,000 cash on charges of burglary and second degree sexual assault.

Baxter was arrested this week after DNA that was collected following a fourth degree sexual assault of a child conviction last year matched evidence taken from the rape of a 78-year-old woman in 2000.

He’s due back in court March 2nd.