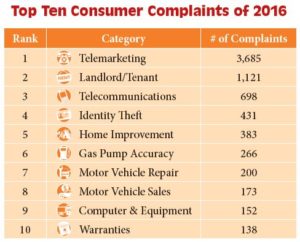 Telemarketers were once again the top consumer complaint in Wisconsin during 2016.

While the issue has been the top subject of complaints filed with the Department of Agriculture, Trade, and Consumer Protection for several years, violations of the state Do Not Call list tended to be the main reason. DATCP Assistant Deputy Secretary Sandy Chalmers says that has shifted in recent years from legitimate businesses to what she describes as “fraudulent international operations.”

Those operations include calls claiming to be from tech support asking for access to your computer, or someone who says they are with the IRS claiming you owe money right away that needs to be paid through a prepaid debit or gift card. “These are typical of the types of impostor scams we are seeing now,” she says.

Even if consumers are able to quickly identify the calls as a scam and hang up, Chalmers says it’s still important for them to file a report with the state. The information helps the agency identify trends and alert the public, as well as build evidence that can be used nationally to help target overseas operations. “Because of the nature of the international fraud, it really takes states working together in partnership with the federal government to bring these operations down,” she says.

Issues with telemarketers accounted for almost a third of the complaints filed with DATCP last year – 3,685 of the 10,346 recorded by the agency. Others in the top five were landlord-tenant disputes, telecommunications, identity theft, and issues with home improvement projects. Rounding out the top ten were issues with gas pump accuracy, motor vehicle repairs and sales, computer and equipment problems, and warranty scams.