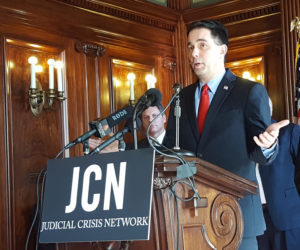 Wisconsin’s governor and attorney general are joining a national chorus of Republicans, who are trying to put pressure on Senate Democrats to vote for President Donald Trump’s U.S. Supreme Court nominee.

Governor Scott Walker and Attorney Brad Schimel both appeared at a press conference at the Wisconsin Capitol Wednesday, where they argued Judge Neil Gorsuch deserves a hearing and a vote in the Senate. “I think people want someone on the bench who’s worthy of being on the bench, no matter who puts them on,” Walker argued.

Senate Democrats have pushed back against Gorsuch’s nomination, after Republicans refused to hold hearings or vote on President Barack Obama’s nomination of Merrick Garland last spring. Garland and Gorsuch were nominated to fill the seat left vacant by the death of Justice Antonin Scalia, who died early last year. Republicans said at the time that the outcome of the presidential election – nine months after Scalia’s death – should decide the future of the high court. Democrats contend the GOP “stole” the pick from Obama.

Walker argued that the two situations are different, and the he’s not looking to “re-litigate” the past. “There’s a whole lot of debate and chatter about process and things of the past – I haven’t heard anybody give a credible argument as to why someone who holds such high credentials, who’s so highly regarded by both Democrats and Republicans alike, shouldn’t be on the court,” Walker said.

Walker and Schimel both criticized Democratic U.S. Senator Tammy Baldwin (D-WI) for saying she will not vote to confirm Gorsuch. “The United States Senate and Senator Baldwin should grant an up or down vote on Judge Gorsuch quickly,” Schimel said. “They owe that to the American people.”

Baldwin, who faces reelection in 2018, has said she supports holding a hearing and vote for Gorsuch – she just does not plan to be one of the 60 votes needed to confirm him.

“I have deep concerns about Judge Gorsuch’s record of ruling against disabled students, against workers, and against women’s reproductive health care. I cannot support a Supreme Court nominee who has ruled that corporations are people,” Baldwin said in a statement. “I also believe people deserve a Supreme Court Justice who will protect the constitutional rights and freedoms of all Americans. I don’t have confidence Judge Gorsuch is that nominee.”