You are here: Home / News / Democrat Tim Cullen rules out run for governor 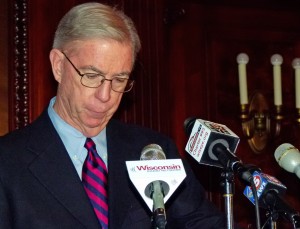 Another Democrat has decided against a run for Wisconsin governor in 2018.

Former state Senator Tim Cullen said Wednesday he has decided not to seek the Democratic nomination in 2018, after concluding he could not raise the resources that would be needed to mount a challenge against Republican Governor Scott Walker, who is expected to seek a third term next year. “I’d have trouble putting together a statewide organization and I’ve even more trouble raising the kind of money that’s need to be competitive,” Cullen said.

The Janesville Democrat, who served in the senate between 1975 and 1987, and again from 2011-2015, said he just was not willing to spend the three to four hours a day on the phone raising money that he believes will be required. “I spent way too much time thinking about what I want to do as governor…but not enough time thinking about how I would get there,” he said.

While several Democrats are considering a run, the only person to announce they will seek the party’s nomination is Barneveld native Bob Harlow. Senate Minority Leader Jennifer Shilling (D-La Crosse) and Congressman Ron Kind (D-WI) have already announced they do not plan to seek the nomination.

Cullen said he’s not encouraging any one candidate to enter the race, but he will support the party’s eventual nominee.

In a statement, Walker campaign spokesman Joe Fadness responded to Cullen’s decision. “With the lowest unemployment rate since 2000, more people working than ever before, and a bright economic outlook for Wisconsin families, it’s not surprising that Democrats continue to think twice and not run against Governor Walker’s strong record of results and reform,” he said.