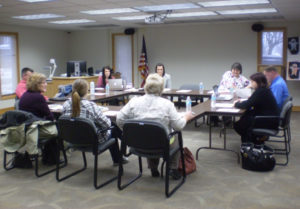 Despite concerns from parents about its adult content, the Marshfield school district will keep Jeanette Walls “The Glass Castle” a part of the high school English curriculum.

A special panel voted unanimously on Tuesday to keep the book in place as one of the school district’s “curriculum-aligned resources” for 10th grade English students. The book tells the story of a young girl living in poverty and her experiences with her dysfunctional family. Some parents of students have argued it contains vulgar language and explicit situational content

Teacher Kathleen Mahoney said the context of the book’s explicit material doesn’t present it as a good thing, but as something to avoid, while parent Randy LeMoines thought the story is about overcoming adversity. “To a teenager that’s going through one or more of these things at home, whether it’s addictive parents or lack of food, maybe there is a light at the end of the tunnel…it happened to her,” he said.

Library and Media Specialist Linda Hanann says literary reviews of the book describe it as being out of the mainstream and containing adult language. However, she said most also make the case that the book has “literary merit.”