You are here: Home / News / Ryan: No reason for Sessions recusal from Russia investigations 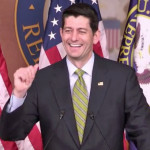 House Speaker Paul Ryan sees no reason for Attorney General Jeff Sessions to recuse himself from Russia-related investigations unless they relate to him directly.

The Janesville Republican said Thursday that investigations have shown that Russia “tried to meddle in the election” – however “we have seen no evidence from any of these ongoing investigations that anybody in the Trump campaign or the Trump team was involved in any of this.”

Ryan said both House and Senate intelligence committees are investigating. “The intelligence community itself . . . did an investigation after the election and gave us the results of that investigation before the inauguration. We have . . . been presented with no evidence that anybody on the Trump campaign, or an American , was involved in colluding with the Russians.”

While he was an adviser to the Trump campaign, Sessions met twice with the Russian ambassador, but testified during his confirmation hearing that he “did not have communications with the Russians.”