A freak accident at a Fond du Lac school has fire officials urging caution around electronic devices that use lithium-ion batteries. 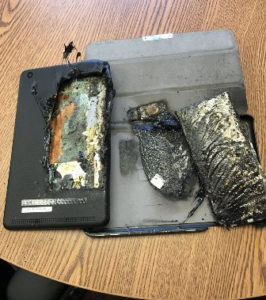 Fire Chief Pete O’Leary says tablet was sitting on a counter at an elementary school on Tuesday, when it suddenly began smoking and caught fire. No one was injured and the only damage was to the device itself, which was not being charged at the time. “It just spontaneously combusted,” O’Leary says.

The tablet was made by Acer in 2014. O’Leary says they contacted the manufacturer and Consumer Product Safety Commission, and there have been no recalls for the particular device.

O’Leary says a common denominator in similar incidents seems to be Lithium-ion batteries. He points to another recent case, involving a woman who was burned on an international flight last month when her battery-operated headphones exploded.