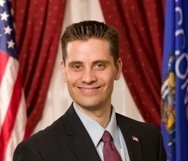 Wisconsin could join the list of states calling for a constitutional amendment requiring a balanced federal budget.

A proposed resolution from state Senator Chris Kapenga (R-Delafield) would have Wisconsin join those requesting a constitutional convention to draft an amendment. Kapenga said he would like to see something similar to what state’s like Wisconsin have in place, where limits are based on a percent of the state’s assets.

With the national debt approaching $20 trillion Kapenga believes there’s a pressing need to require that Congress pass a balanced budget. “When…successful civilizations have failed, every single time the national debt, or the debt of the country, has always been a factor in their fall,” he said.

Critics worry a convention could result in other constitutional changes being proposed, which may fall outside the scope of a balanced budget amendment. If that were to happen, Kapenga said 38 states would still have to ratify any amendment that comes out of the convention – which would mean any proposed amendment would have to be balanced enough to get support in states that lean towards both Republicans and Democrats.

In order to call a convention, 34 states would have to pass a resolutions in support of holding one. At least 28 states have already done so, and Kapenga said Wisconsin and as many as five others have active resolutions.