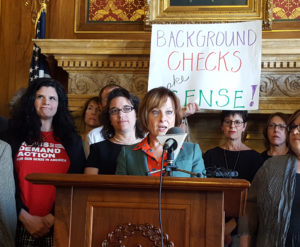 A Democratic state lawmakers is re-introducing a bill that would require universal background checks on gun purchases.

While state Representative Terese Berceau (D-Madison) admits the bill is unlikely to advance this session, she says it’s an important issue to discuss. The Madison Democrat says nearly 40 percent of all guns sold in the U.S. lack the “reasonable safeguard” of having licensed gun dealers run background checks on buyers.

Berceau and other lawmakers, along with several advocacy groups, medical professionals, and clergy, are also forming a new Wisconsin Coalition for Gun Safety. The group will work to counter many of the pro-gun proposals Republican lawmakers have recently introduced, such as a bill that would allow those who can legally own a gun to carry a concealed weapon without having to obtain a state-issued concealed carry license.