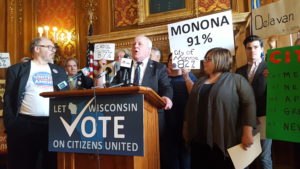 Democratic lawmakers plan to once again push for a statewide vote on overturning the Citizens United decision.

The controversial 2010 U.S. Supreme Court ruling opened the door to unlimited corporate contributions to political campaigns. Since it was handed down, state Sen. Dave Hansen (D-Green Bay) says outside spending campaigns has more than doubled. “The voice of average voters, and even the candidates themselves, is often drowned out by the amplified megaphones of corporations.”

Hansen and Rep. Lisa Subeck (D-Madison) are introducing a resolution that calls for a statewide advisory referendum on whether Wisconsin would support a U.S. constitutional amendment to reverse the decision. Hansen argues it’s “way past time to level the playing field,” by giving every citizen an equal voice on the issue.

So far, 105 communities in the state have passed similar resolutions with overwhelming support. Previous attempts to get a vote in the state Legislature have seen little movement though, due to opposition from majority Republicans.