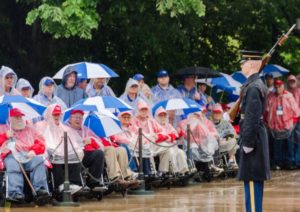 As the nation recognizes Memorial Day, an organization that helps veterans connect with their history is expanding its reach.

Since 2008, Wisconsin Honor Flight programs have been offering veterans a chance to visit their memorials in Washington D.C. While World War II and Korean War veterans have made up the majority of those, Brian Ziegler with Badger Honor Flight says all of the Wisconsin groups are now including Vietnam veterans.

“These one day trips cost a veteran nothing,” Ziegler says. “It is the long overdue welcome home thank you they never got when they returned home.”

More than 15,000 Wisconsin veterans have made an honor flight in the past nine years through one of the state’s six regional groups. While some started offering flights to Vietnam veterans as much as four years ago, Ziegler says it was only recently that all six groups offered the chance.

Ziegler says nearly 3,800 veterans statewide are on waiting lists to take an honor flight with one of the state’s groups.