You are here: Home / Agriculture / Bill would decriminalize having small amounts of pot in Wisconsin 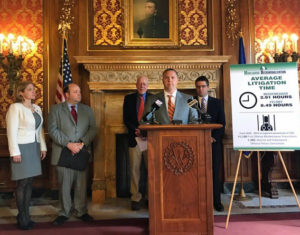 A Republican lawmaker wants to decriminalize possessing small amounts of Marijuana in Wisconsin. Representative Adam Jarchow of Shell Lake says the bill represents something of a journey for him — after he heard from constituents while campaigning last year.

“I was pretty surprised, by how many voters talked to me about that,” Jarchow said during a press conference at the Capitol on Tuesday. “If people in rural northwestern Wisconsin, in a conservative district, think that we need to change course, than maybe we do.”

Senator Fred Risser is a Democrat from Madison, where marijuana has already been decriminalized. “Quite frankly, it’s necessary sometimes for local units of government to move ahead of the state,” Risser said.

Jarchow’s bill would make possession of a small amount of pot a misdemeanor offense, punishable by a one hundred dollar fine. “I cannot stress how important that is, for young people who are entangled in the criminal justice system, to be able to rebuild their lives,” said the bill’s Assembly cosponsor, Milwaukee Democrat Evan Goyke.

“In a state where first offense drunk driving is not a felony, it seems to me to be pretty odd that possession of a couple joints could land you in jail or prison,” Jarchow said.

Previous efforts at decriminalizing marijuana in Wisconsin have failed to advance in the legislature.