You are here: Home / Brewers / Braun headed back to the DL (AUDIO) 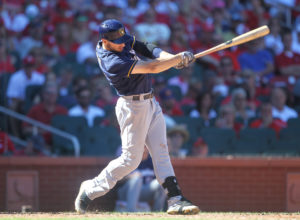 Ryan Braun was playing in just his third game since coming off the disabled list with a calf injury.  Now, he’s headed back to the DL after leaving Thursday nights game with left calf tightness.  The Milwaukee Brewers outfielder will return to the disabled list on Friday and for how long, remains to be seen.

“Same calf, same situation,” said Braun after the game.  “I knew, obviously, when I came back I wasn’t at 100% but I was hoping it was good enough.  I was optimistic I’d be able to work through it.

While no timetable has been set, it would appear likely that Braun will miss more than the minimum of 10 days, because the Brewers have to make sure he is totally healed.

The Brewers spent eight games atop the NL Central Division standings before falling out of first place with Thursday nights loss.  Now, the Brewers (25-22) need to shake out of their slump and try to avoid losing all of the ground they’ve gained.

The Brewers do get right-handed pitcher Junior Guerra back from the disabled list.  He’ll start Friday nights second game against Arizona.

Milwaukee will need to make a roster move Friday when Braun heads to the DL.  Could we see top prospect Lewis Brinson or will the Brewers add a pitcher to their roster?

Whatever move they make, they need to get their offense going again.  That offense was a big factor in their climb to the top of the Central Division.

AUDIO: Ryan Braun on his injury :22

AUDIO: Craig Counsell says they have to start from scratch with Braun :10

AUDIO: Craig Counsell said they have to keep plugging away :19