You are here: Home / Legislature / Lawmakers say they will reject self-insurance proposal 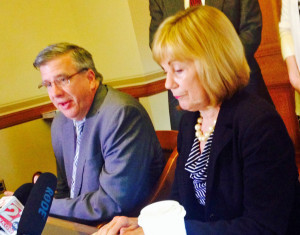 The co-chairs of the Legislature’s budget committee say they expect the committee will reject a proposal to move state employee health plans to a self-insurance model.

Republican state Representative John Nygren (R-Marinette) said there are too many questions about the $60 million in savings Governor Walker claims the switch would produce. After reviewing the contracts the governor’s office released Monday, Nygren questioned where the estimates were coming for. “There is no percentages that are in there that help me actually understand how they came up with the number that they came up with.”

Sen. Alberta Darling (R-River Hills) said there’s no convincing evidence the move is needed, pointing to the fact that state employee health insurance premiums increased the last time the state used a self-insurance approach. “With the uncertainty with Obamacare and national insurance companies, I think we need to stay where we are,” she said.

Speaking in Appleton, Walker argued it was wrong to dismiss the savings at a time when lawmakers are asking to spend more money on transportation. Nygren said the finance committee will look for other ways to off-set any effect the change could have on the state budget.