You are here: Home / Legislature / Schimel backs effort to get tough on child neglect 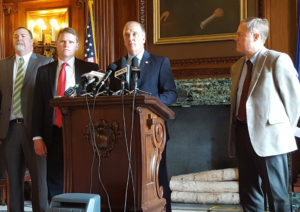 Wisconsin’s attorney general is backing legislation that would make it easier to prosecute cases of child neglect.

The bill from Republican lawmakers would create a graduated penalty system for cases of neglect that put the health and safety of a child at risk. Attorney General Brad Schimel says it would help bring more attention to a serious issue that can have long-term development of victims. “Neglect can every bit as damaging as physical or sexual abuse,” Schimel says.

The bill would also change a provision in current law that requires prosecutors to show neglect was intentional. “By its nature neglect is not intentional,” Schimel argues. “This bill would remedy that confusion in our law by setting a criminal negligence standard that would be far less confusing to jurors.”

A similar bill was introduced last session, but did not pass in the Legislature.