You are here: Home / News / Walker warns of project delays if transportation split from budget 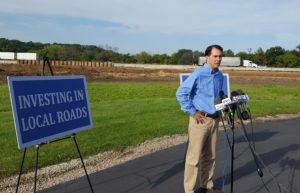 Governor Scott Walker warns that budget inaction risks costly delays to major highway projects now under construction. That was the message Walker made to lawmakers working on the state budget, during a press conference on Tuesday at an interstate rest stop in Beloit.

“A delay of a week or two like we saw two years ago will not have a . . . negative impact,” Walker said. “The big concern we have is if it were separated.”

Republican lawmakers at odds with Walker on how to pay for projects have talked of splitting off the transportation piece. “There’s no reason why, with the majorities in the Assembly and Senate, they can’t get a budget done the way that it is.”

Asked about the possibility of open road tolling as a means to generate revenue for transportation, Walker said he could only support that if it were tied to a reduction in the gasoline tax.

Also on Tuesday, the nonpartisan Legislative Fiscal Bureau reported that the state transportation fund will end the two-year budget cycle with nearly $102 million. That’s due to higher gas tax collections and lower debt service costs, and is significantly higher than the earlier projection of $8.4 million.