You are here: Home / News / Budget talks ‘back on track’ 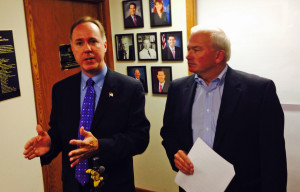 A day after a brief and contentious meeting, Republican leaders in the Legislature were more upbeat about where budget talks stand now.

Senate Republican Leader Scott Fitzgerald emerged from a closed door meeting with Governor Scott Walker and other GOP legislative leaders on Wednesday morning, seemingly more optimistic about the direction talks are moving in. “I think we’re back on track,” the Juneau Republican said, during brief remarks to reporters.

The more positive outlook came just a day after budget talks between the two chambers broke off, with Assembly and Senate leaders accusing the other of being unwilling to negotiate on outstanding issues in the budget – primarily transportation funding.

Asked about the change in tone, Assembly Speaker Robin Vos (R-Rochester) joked that maybe a good night’s sleep had made a difference. “I want to negotiate a solution that everyone can live with. I think that’s where the governor was and I think I heard that from Senator Fitzgerald today,” he said.

The state’s fiscal year ends on June 30th, but leaders from both chambers have said it’s unlikely a budget will pass until sometime next month.