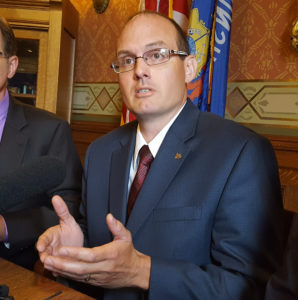 The state Assembly has approved a bill that supporters say will protect the ability of opposing viewpoints to be heard on University of Wisconsin campuses.

The “Campus Free Speech Act” comes in response to several instances nationwide of controversial conservatives being disrupted on college campuses while trying to speak to students. The bill would have University of Wisconsin System students face suspension and even expulsion if they prevent someone from speaking during a campus event.

Rep. Jesse Kremer (R-Kewaswkum) said the measure ensures the free marketplace of ideas on college campuses is allowed to thrive. “Free expression must be and shall be protected at Wisconsin’s publicly funded college and university campuses.”

The Madison Democrat noted that part of going to college is about learning how to grow a backbone, learning your values, and learning to defend them.

Minority Leader Peter Barca (D-Kenosha) described the bill as an “attorney’s dream come true,” since it will likely face a legal challenge the first time a student faces discipline.

The legislation passed on a 61-36 vote. It now heads to the state Senate.