You are here: Home / Crime / Courts / Hays ruled not guilty by mental defect 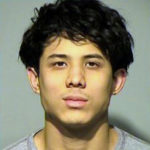 A Sauk County judge has ordered a West Allis man accused of a deadly Interstate shooting to be committed to a state facility for up to 40 years.

Zachary Hays randomly shot and killed an Illinois woman on May 1st of last year in Sauk County, as she headed home from Wisconsin Dells with her family. The court deemed the 21 year-old Hays not guilty by reason of mental defect. Judge Michael Screnock said Hays’ state of mind was deteriorating, leading him to believe he was being hunted by the FBI, Freemasons and Illuminati.

The judge noted that four separate doctors all agreed Hays was mentally unstable in the months leading up to the day he shot and killed Tracy Czaczkowski on Interstate 90/94 near Baraboo.

Doctors determined that Hays was schizophrenic and believed he was being followed by the FBI. The report stated that Hays also believed that cars with tinted windows, like the one driven by the victim’s family, were following him, which is why he opened fire on their vehicle.

The not guilty finding came during a hearing at which Tracy Czaczkowski’s husband testified on the impact of his wife’s killing. “My children lost their mother in the most horrible way, and all while they watched,” Greg Czaczkowski said. “I relive that moment 10 times a day, every day. I have a hole in my heart that will never heal. I will never forget your face — ever — and what you did to our family.”

Hays also faces a first-degree reckless homicide charge in the death of his neighbor, 42-year-old Gabriel Sanchez, on the same morning of the interstate shooting. A competency evaluation ordered in that case found Hays could be diagnosed with schizophrenia or other psychotic spectrum disorder.

He is scheduled to face trial in that case July 5.