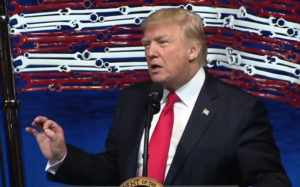 President Donald Trump will be making a return visit to Wisconsin today.

The president is expected to speak about workforce development at Waukesha County Technical College. He will also attend a $1,000 per person fundraiser for Governor Scott Walker in Milwaukee later this evening.

The White House says the president will also meet with two people on Air Force One when it lands in Milwaukee who are “victims of Obamacare/the Affordable Care Act.”

The visit is Trump’s second to southeast Wisconsin since he was sworn-in as president. It also comes just four days after Vice President Mike Pence was in the region to discuss efforts to repeal Obamacare.