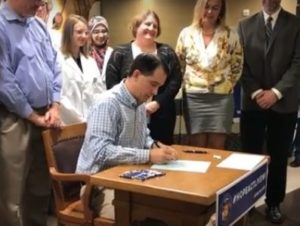 Efforts to fight opiate abuse in Wisconsin continued Monday, as Governor Scott Walker signed 11 bills during stops around the state that are aimed at stopping the epidemic.

Walker started out the day with a signing that took place at the Medical College of Wisconsin located on the St. Norbert College Campus. The governor said opiate addiction crosses all borders. “The small towns, suburbs, big cities, everywhere in between. It crosses economic status, political status, demographics of every kind,” he said.

The bills include making sure ‘schedule 5 medications’ have to be prescribed, provide more addiction education for medical professionals, and allow for an expansion of HOPE centers that focus on addiction treatment.

The HOPE Agenda was introduced by Nygren back in 2013. HOPE stands for heroin, opiate, prevention, and education.