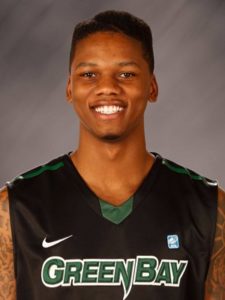 The NBA‘s Toronto Raptors signed former Green Bay Phoenix forward Alfonzo McKinnie to a multi-year contract.  McKinnie is coming off a strong season in which he was named an NBA G League All-Star.

McKinnie is a Chicago native who played two seasons at Green Bay from 2013-15.  He averaged 14.9 points and 9.2 rebounds in 50 games last season for the Windy City Bulls of the NBA G League.  He reached double figures in 41 of those games and scored a season high 29 points against Sioux Falls on March 4.  The 6’8 forward was named to the 2017 NBA G League All-Star game in New Orleans, scoring 16 points in 22 minutes.

McKinnie will head with the team into training camp this fall and will hope to make the Raptors official NBA roster.

The Raptors made the NBA Playoffs last season as the No. 3 seed, knocking off the Milwaukee Bucks in the first round in six games.  They were swept by the Cleveland Cavaliers in four games in round two.