You are here: Home / News / Nicholson announces US Senate bid 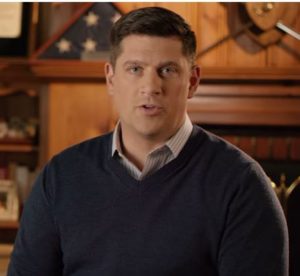 A marine veteran and businessman plans to run for the U.S. Senate.

Kevin Nicholson released a video Tuesday morning to announce he’s seeking the Republican nomination in 2018. “You send me to the U.S. Senate, I won’t back down,” Nicholson pledged in the video. “I’ll fight for our great country and the conservative values that built it.”

Nicholson is the first Republican to announce he plans to challenge Democratic Senator Tammy Baldwin (D-WI), who will be seeking re-election for the first time. In the video, Nicholson described Baldwin as a “disaster on national security,” while calling her “liberal, divisive, and…just embarrassing.”

Nicholson’s campaign is being bolstered by a political action committee that has raised more than $3.5 million in funding. That fund includes $2 million donated by Uline Corp. founder Richard Uihlein.

Several other Republicans are still considering whether to enter the race, while Nicholson has also drawn criticism over his conservative credentials. The Delafield resident was an active Democrat in college, and headed up a national organization for the party. In the video, he attributed that time in his life to being a part of his “younger days.”

“I used to do nothing and know everything,” Nicholson said. “But since then we’ve had three kids, I fought in two wars, and I worked in businesses around the world – and after you’ve been hit in the face with that much reality, you cannot help but become a strong conservative.”

Democrats offered criticism for Nicholson’s announcement, with the state party calling him a “the first of many third tier candidates.”

In a statement, DPW Chair Martha Laning said “Nicholson is only out for himself and he’s already lied to voters about basic questions on his past – so why would they trust him with their future? Worse, Kevin’s in the pocket of an out-of-state billionaire whose money he’ll rely on to bankroll his campaign. We can’t count on Kevin to be honest or stand up for us.”