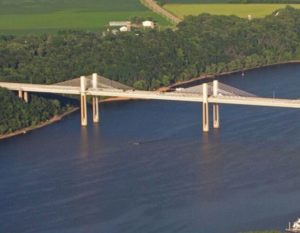 Governor Scott Walker got to ride over the new St. Croix Crossing Bridge before taking part in a ribbon cutting ceremony for the newest highway link between Wisconsin and Minnesota on Wednesday.

“It’s a nice feeling (to see the project completed) and it’s a beautiful view,” said Walker, who participated in the ribbon cutting along with Minnesota Governor Mark Dayton.

Walker said the St. Croix crossing and the widening of Wisconsin Highway 64 to four lanes will bring economic benefits to Wisconsin. He noted that the debate over building the bridge was “decades in the making.”

“The good news is that when we really needed it, everybody kind of set their differences aside and got the job done,” said Walker, calling the St. Croix Crossing Bridge “the bridge of cooperation.”

The bridge will be fully open to traffic at 8:00 p.m. on Wednesday. Construction began in 2013 on the project, which cost about $600 million — $377 million for the bridge itself, and the rest for new highways on both sides of the St. Croix River.