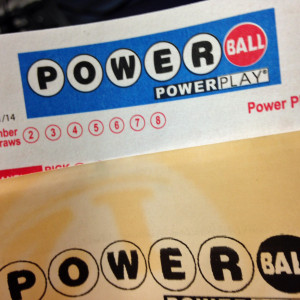 A Fond du Lac convenience store known for selling plenty of big winners over the years is seeing a huge spike in business as the Powerball jackpot continues to grow.

Ma and Pa’s Grocery Express, which has sold multiple nine-figure Powerball tickets, is part of the ‘Miracle Mile.’

Manager Amy Karow says they have more than twice their normal staff scheduled to work Tuesday and Wednesday, with roughly 2,000 lottery players expected to come through the doors.

Karow says the potential big payday has drawn people from near and far. “We actually had a couple come from Canada last Wednesday, took a little ride on their motorcycle.  All around the state, outside of the state, Illinois, Iowa, just to come get tickets and then turn around and go home.”

Karow notes those people have turned to a variety of strategies. “We have a lot of people bring in their own slips.  Some people that bring in a couple hundred dollars just for tickets don’t care. They just take the quick picks. There’s people that come in looking for mistake tickets that were accidentally printed.”

Karow has also seen some players turn to superstitions.

“Say the Powerball number was 13 on Wednesday, they’d like the Powerball 13 for today.  Some people, if they get the same numbers on two different lines, they want a different set of numbers.”

Ma and Pa’s sales have included $208 million and $111 million winners.

Tickets cost $2 each and must be purchased by 9 pm Wednesday.