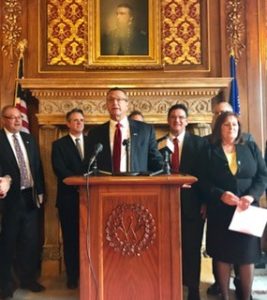 Lawmakers at the Capitol are getting ready for a deep dive into the state’s tax code. Assembly Ways and Means Committee chair, Representative John Macco (R-De Pere), said Wednesday that the state’s existing tax structure is dragging Wisconsin’s economy down.

“When we look at the two things that are disprorptionate and that are causing negative effect on our economy, it’s income tax and property tax. Those two things are out of whack right now,” Macco said during a press conference, where he announced that four new members have been added to the committee, and four new subcommittees have been established with the intent to totally review Wisconsin’s tax code.

The process of examining Wisconsin’s tax code comes as a similar project is underway at the federal level in Washington, where Republicans are expected to release the details of major tax legislation on Thursday. “I happen to think we ought to do this whether Congress acts or not, but if they do act, then it becomes critical that we do this,” Macco said.

House Speaker Paul Ryan, who has been promoting the need federal tax reforms for years, has suggested that such reforms could lead to taxpayers eventually being able to file their returns on a single piece of paper. “We’re going to do a 12 month study period here, to see what we can do,” Macco said. “But if we could simplify it (state tax filing) to that level, that would be exciting, wouldn’t it?”

“Wisconsin taxpayers and businesses have suffered for far too long under an overly burdensome tax code that doesn’t work for families, retirees and job creators,” said Assembly Speaker Robin Vos. “This restructured committee will tackle real reform in a transparent process that will give the public ample input in developing a new tax code that is fair and simple with lower rates.”

“We don’t need fancy subcommittees and new websites to figure out how to reform Wisconsin’s tax code,” said Representative Chris Taylor (D-Madison). “Rather than a restructured Ways and Means Committee, we should start by repealing large corporate tax giveaways and returning that money to low and middle income individuals and families who need it the most.”