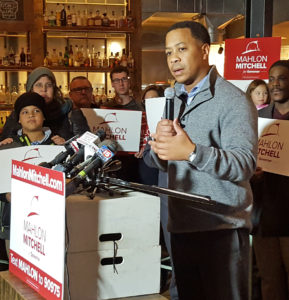 Another Democrat has entered the crowded field of those hoping to run against Republican Governor Scott Walker next year.

Mahlon Mitchell, who serves as president of the Professional Fire Fighters of Wisconsin, announced his campaign for the Democratic nomination during stops across Wisconsin on Monday. Speaking in Madison, Mitchell said he wants to focus on raising the minimum wage, fully funding public schools, and expanding access to health care. “We’re in a fight for a future,” he told a crowd of several dozen supporters at a downtown restaurant.

Mitchell referred to Walker’s decision to seek a third term as plan B, after the Republican fell short in his run for president and “threw Wisconsin under the bus.”

Mitchell unsuccessfully ran for lieutenant governor during the 2012 recall election against Republican Lt. Governor Rebecca Kleefisch. He joins nearly a dozen other Democrats who have either announced a run for governor in 2018 or said they are considering one.