You are here: Home / News / Assembly Majority Leader Steineke not running for reelection 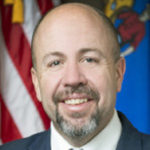 The leader of Republicans in the Wisconsin Assembly is not running for reelection. Representative Jim Steineke of Kaukauna was first elected to his northeast Wisconsin district in 2010, and elected as Majority Leader in 2015.

In a statement, Steinke said he won’t run for reelection this fall, and that “the time has come to pass the torch,” as he returns to the private sector. Speaker Robin Vos called Steineke “a dedicated, strong conservative voice.”

“As I refocus my efforts on returning to the private sector in the weeks and months ahead, I remain committed to doing everything in my power to advance conservative policies and serve as a check against the governor and his administration to prevent extreme ideologies from being enacted,” Steineke said.