You are here: Home / Sports / Snow daze: another big blow for WI 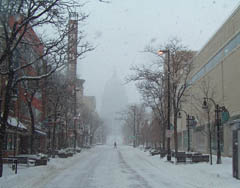 Another major winter storm is adding more snow to what's already been one of the snowiest winters on record for much of Wisconsin.

A slow moving winter storm is expected to dump more than a foot of fresh snow in many locations in southeastern Wisconsin, with significant snowfall amounts in south central Wisconsin as well. The National Weather Service predicts accumulations in excess of 12 inches will occur in the area southeast of a line from Dubuque, Iowa to Evansville to Jefferson to West Bend to Sheboygan. 15″ to 18″ is possible along and just north of the Interstate 43 line from Janesville to Waukesha and Milwaukee. Total snow amounts will taper off to 10 inches in the Madison area, and 6 inches in Wisconsin Dells. In Janesville, WRN affiliate WCLO reports that 7″ of snow fell between 7:00 Tuesday night and 7:00 this morning. Rock County government offices and Janesville city offices were closed. In Mlwaukee, Mayor Tom Barrett also ordered city offices closed today. Schools are closed in Madison, Milwaukee, and most other districts.

The weather service says gusty northeast winds of between 25 and 35 mph will generate blowing and drifting snow, especially in open areas. Visibility will drop to below 1/4 mile at times at the height of the storm, and west-east orientated roads will experience considerable drifting, perhaps 2 to 4 foot drifts. Potentially, some roads will become impassable. Temperatures should hold in the mid to upper 20s today.