You are here: Home / Archives for Weather

You’re not going to escape it – there is at least a chance of snow for just about everyone in the state over the next few days.

The National Weather Service says you should enjoy the nice holiday weather today because Friday, Saturday and Sunday figure to include snowfall throughout Wisconsin.

Western Wisconsin could be covered by another six inches of snow, while Madison and Milwaukee can expect about an inch.

In northwest Wisconsin, snow plows have been out since early Wednesday morning, dealing with the winter storm that’s brought snow to the area. “We’ve been out since 4:00 a.m. this morning, said Matt Erickson, patrol supervisor with the Ashland County Highway Department. “It’s a heavy, wet snow, so it is sticking to the highways. We are are continually plowing, so at times the roads will look bad. But we’re out there doing what we can with it.”

“Wind is stil quite an issue, gusting to 30 to 40 miles and hour,” said Iron County highway commissioner Mike Swartz. As of 10:00 a.m. Swartz said 12 inches of snow had fallen in Hurley. “The roads are not good. We just cannot keep up with that amount of snow in a short period of time.”

The National Weather Service in Duluth has forecast heavy accumulating snow and strong northerly winds across northwest Wisconsin for Wednesday, with snowfall continuing through midnight. Difficult to nearly impossible driving will impact Thanksgiving holiday travel, and power outages are possible.

“If you do not have to drive, please, don’t,” Swartz said. “And if you do drive, please us your headlights. We noticed a lot of vehicles without headlights this morning. It makes it tough on our guys and it makes hard on the drivers as well.”

The numbers are in, for the opening weekend of Wisconsin’s gun deer hunt. “Things started out a little slower than we were hoping that they would, but still we had over 90,000 deer registered, with a little over half of those, 47,000 being antlered bucks,” said Kevin Wallenfang with the Department of Natural Resources.

The nine-day gun deer season opened Saturday and runs through Sunday. “I would just encourage people, you know we’re only talking about the first two days of the season, and there’s still lots of time out there and lots of deer out there to pursue, so get on out there and enjoy it,” Wallenfang said.

The Wisconsin DOT is reminding drivers to pay attention this winter. “Take it easy, slow down, give yourself some additional time. That is one of the best ways you can say ‘thank you’ to a snowplow driver,” WisDOT spokesman David Hunt told WTAQ. “You never know what those conditions are going to bring. You never know exactly when that road is going to be clear, but one thing is for certain; there’s going to be people out there working really long hours trying to make sure all of us stay safe.”

Hunt said driving a snowplow is essentially a year-round commitment. “If it’s not actually winter and snowing, they’re getting ready, doing training on the plow driving, preparing to try making those roads as clear as they can when those storms hit,” Hunt said “These are folks who really care deeply about public safety.”

On Snowplow Driver Appreciation Day @WisconsinDOT sends a big “Thank You!” to all of the people who work long hours during the winter months to help keep Wisconsin’s roads safe for everyone. Thank a plow driver today! #wiwx #thankaplowdriver pic.twitter.com/840mxw8T34

Motorists are advised to stay at least 200 feet behind any working snowplow, and to make sure the plow’s mirrors are visible which means the plow driver can see you. It’s also important to remember that the road in front snowplows has not been treated. Hunt emphasizes the point that no vehicle is immune to winter weather.

Most traffic crashes in winter are caused by drivers going too fast for conditions. Posted speed limits only apply when travel conditions are ideal. WisDOT contracts with all 72 county highway departments for winter maintenance on state roads. Monday is Snowplow Driver Appreciation Day.

Deer hunters will be dealing with some challenging conditions when they hit the fields as the gun season opens Saturday. Wisconsin Department of Natural Resources wardens are urging them to watch out for the ice, especially if they aren’t familiar with the area.

It has been unusually cold, but the ice on ponds and marsh areas may not be thick enough and that could be dangerous. Hunters are being urged to take a “spud bar” with them to tap the ice. If it’s thick enough to walk on, it won’t crack when the hunter taps it with the metal.

The weather outside seems more like mid-winter than mid-November, with Tuesday morning low temperatures of the sort more commonly experienced in January or February.

How low did it go? The National Weather Service in Milwaukee reported records for this date were broken in Madison – at 4 degrees, and Milwaukee – at 9 degrees. The Weather Service in Green Bay reports records were also broken in Anitigo, Marshfield and Oshkosh, with wind chills Tuesday morning well below zero.

There’s also snow on the ground across most of the state, and more snow in the forecast Wednesday night for much of Wisconsin.

This early blast of winter weather will be hanging around for a number of days.

National Weather Service Meteorologist Taylor Patterson says you’re not mistaken if this seems out of the ordinary.

“Yes, yes, this is quite unusual for early November. As far as temperature wise, well below normal, and then for the snow, both Milwaukee and Madison, we’ve had records set for consecutive number of days with snow on the ground.”

Patterson says we can expect cold temperatures and more snow.

“Expect Tuesday morning to be really cold with temperatures in the single digits. For the highs on Tuesday, we’re expecting highs to be in the teens or low twenties. As we get into Wednesday, Wednesday night, we could see another round of precipitation and some snow.”

Expect sunshine and temperatures near freezing on Thursday. 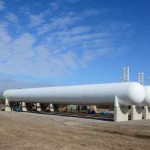 Citing a late corn harvest and plunging temperatures leading to an increase in demand for propane, Wisconsin Governor Tony Evers has signed an executive order declaring an energy emergency. “Hundreds of thousands of Wisconsinites depend on propane to heat their homes and right now farmers are depending on it to dry their corn,” said Evers in a press release from his office. “Ensuring that we get propane to these folks is critical for the health, safety, welfare, and economic well-being of Wisconsinites across our state.”

Evers’ order temporarily lifts restrictions on any truck driver delivering propane, so long as they are not sick or tired. Federal and state regulations limit the number of consecutive hours a truck driver can be behind the wheel to 14. After that, rules mandate a 10-hour rest period before that person can drive again.

“This Executive Order will allow for the swift and efficient delivery of petroleum products throughout the state,” Evers said.

The National Weather Service is investigating a possible tornado in south central Wisconsin Tuesday night, and preliminary dame estimates are available for a tornado that struck in western Wisconsin a week ago.

Damage from last week’s tornado in the Town of Wheaton is estimated at more than $3 million. Chippewa County Emergency Management director Dennis Brown said he submitted a preliminary damage estimate to the state, which includes costs of repairing or replacing 29 homes damaged or destroyed by the September 24th tornado.

Debris removal is estimated at $90,000 so far. Brown said volunteers have helped defray those costs, with more than a thousand people taking part in cleanup efforts over the weekend.  The town will apply for assistance through the Wisconsin Disaster Fund.

The The EF3 tornado touched down in Elk Mound around 7:43 p.m. Sept. 24 and traveled east into Chippewa County, moving through the town of Wheaton and ending just west of Chippewa Falls, according to the National Weather Service.

The National Weather Service will also investigate whether severe storms which caused damage on Fort Atkinson’s south side Tuesday night may have included a tornado. Downed trees and roof damage were reported.

The Federal Emergency Management Agency (FEMA) has issued a major disaster declaration for 17 Wisconsin counties and two tribesaffected by severe storms, tornadoes, and flooding in July.

The Menominee Indian Tribe of Wisconsin and the St. Croix Chippewa Indians of Wisconsin were also included. Marinette County was included in the governor’s request letter but is still under review by FEMA.

“We are glad the federal government moved quickly to approve disaster assistance for folks that were devastated by the severe storms last month,” Evers said “This is an important step in helping communities across our state rebuild and recover.”

The declaration allows local governments to apply for assistance, which will help communities recover some of the costs incurred through emergency protective measures, repairing infrastructure, and removing debris.

Multiple rounds of storms beginning on July 18 and continuing through July 20 brought heavy rain and flash flooding. Strong winds with speeds up to 100 mph downed hundreds of thousands of trees and numerous power lines. Two people were killed during cleanup following the storms. In addition, more than 300,000 customers were without power for days.

The major disaster declaration is for Public Assistance, which covers eligible projects submitted by counties, cities, townships, and certain private, not-for-profit organizations. The program is not for businesses or homeowners as the level of damage in these areas, unfortunately, does not currently meet requirements for federal relief.