You are here: Home / Weather / DNR looking at dams 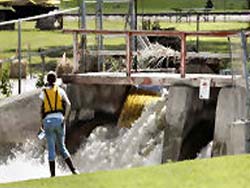 Still, Department of Natural Resources Dam Safety Chief Meg Galloway says the vast majority were able to weather the storms just fine. She says it's encouraging that most of the dams in flood impacted areas were able to function well.

The DNR has been in contact with the owners of over 200 dams in southern and central Wisconsin that may have been damaged. The agency has been working with owners of the damaged and destroyed dams as they make repairs. Galloway says the floods have provided a valuable lesson for many of them, in that's important to have an emergency plan in place to handle rapidly rising waters.

Galloway says some of the dams that were destroyed are being rebuilt. Those that were damaged have been ordered to reduce water levels until repairs are complete.

About 20 dams still need to be inspected, once water levels in those areas recede.