You are here: Home / Weather / Cleaning up, with more on the way 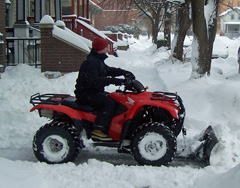 Much of southern Wisconsin is digging out from the first major Winter storm of the season, which dumped up to a foot of snow in some areas.

In Racine and Kenosha counties, motorists were battling gusty winds which created whiteout conditions at times. Road conditions were generally poor as numerous slide offs were reported. Commuters in Madison and Dane County, where snowfall amounts ranged from 9 to 11 inches, faced a similarly daunting task. Near Hartford in Washington County, a spotter for the National Weather Service reported 10.4 inches of fresh snow.

Madison Metro reported busses on most routes running ten to twenty minutes late this morning as drivers struggled to make it up hills. Dane County increased the number of deputies on the road to deal with weather related emergencies.

At the state Emergency Operations Center, which was activated last night, Chris Marschman said the worst backups were on Highway 41 near Neenah and 43 in Waukesha County. Marschman says the problem now, throughout the state, will be drifting, with winds gusting to 20 miles and hour or more.

The National Weather Service at Sullivan had predicted that this snowfall would push total accumulations in both Madison and Milwaukee above where they were at this point last December, when both cities experience above average snowfall. Additional snow is expected this weekend and early next week over much of the area that's digging out today.

LOOK: More images from the storm .