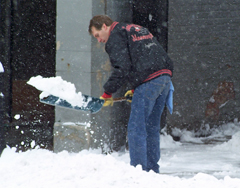 It's been a snowy December for south central Wisconsin. “You know the old saying, if you're going to have a lot of snow, you might as well break a record along the way, and that's certainly true for Madison,” says Rusty Kapela, a meteorologist with the National Weather Service in Sullivan , who calls Madison's chances of a breaking the all time December snow fall record “a slam dunk.” December snowfall records are likely to be broken across much of southern Wisconsin, from La Crosse to Janesville and Beloit. The record snowfall for the month of December at Milwaukee is 49.5 inches, which was also set in 2000. With Milwaukee's total at 30.1 inches for this month, that record is not yet in jeopardy of being erased.

Madison also had recorded 31.1 inches of December snow through Sunday, and there's plenty more before the end of the month. As for whether this winter will be a repeat of last winter in terms of total snowfall, Kapela has some reassuring news on that concern. “We looked back at snowfall records all the way back to 1884-'85, and we could not find any other case where Madison had back to back winters with 100 inches of snow,” Kapela says. “It's possible, but not likely.” However, Kapela adds this proviso: “meteorologically, anything is possible.”