You are here: Home / Weather / Piling up 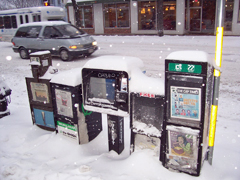 The Wisconsin State Patrol is urging drivers not to travel, as most interstates and major highways are snow covered and slippery. Sgt. Tanya Conners says crews continue to plow, sand, and salt, but it's very treacherous and conditions aren't expected to improve soon.

This winter storm could dump nearly a foot of snow across a large swath of central Wisconsin.

Snowfall amounts are going to vary across the state, but in Fond du Lac County by early this morning County snowplow drivers had already dealt with more than 6 inches. And that was hours ago with the snow continuing to pile up. Stu Kastein is a patrol superintendent with the County Highway Department. He says drivers today should proceed with caution at intersections because with this amount of snow road salt has no effect. Additional accumulations are expected into the early evening hours.

Side streets in Madison may be more slippery this year, as the city looks to get by with less salt. George Dreckman with the Streets Division says not only is the city cutting back on the amount of salt it mixes with sand it's also using a salt brine solution on the roads.

There have been a few crashes and cars sliding off roads. The State Patrol's Conners says there were no serious injuries. State troopers were busy overnight as the drivers tried to navigate interstates and major highways during the first major winter storm of the season. To check on the latest winter road conditions, call 1-800-ROADWIS (762-3947) or view this information on the Web .