You are here: Home / Weather / Digging out continues
As much of Wisconsin continues to dig out, the National Weather Service has recapped the winter storm which 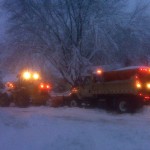 dumped up to 17 inches of snow on some locations, and that knocked out power to thousands of households.

According to the NWS, the heaviest band of snow fell north of La Crosse into the Winona, Minnesota area, southward through La Crosse and into northeast Iowa to near Oelwein. As the storm system approached, it also strengthened producing strong northwest winds that gusted to 45 mph at times leading to significant drifting and blowing snow. Visibility were reduced to near zero, especially in open and higher terrain where blizzard conditions prevailed.

Thursday morning saw frigid temperatures just above or below zero statewide, with windchill factors in the teens below zero. Residents are urged to take adequate precautions to deal with the cold temperatures. As of Wednesday night, all roadways were passable, but there are many snow-covered and slippery spots. Many counties were pulling trucks from secondary roads early Wednesday evening to give plow drivers a rest. Commuters in Madison, Metro Milwaukee and the Fox Valley found slow going on their way into work Thursday morning. School resumed for students statewide as well, after most districts closed on Wednesday.