You are here: Home / Weather / Winter time is brine time 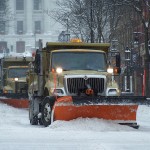 More and more Wisconsin roadways are being treated with a salty solution. While it may seem like some highway maintenance vehicles are spraying water on the highway, what they’re really doing is applying salt brine to the pavement to help prevent frost or ice from forming on the road’s surface.

“What you find is, if you liquefy the salt and apply it, typically it’s about a third as much in terms of the raw quantity of salt that you’re actually using to get the same result,” says Mike Sproul, the Wisconsin DOT’s winter maintenance engineer.

Highway departments in 62 of Wisconsin’s 72 counties use the brine procedure to help prevent frost or ice formation on highways, especially on bridges, bridge approaches, and other trouble spots. And, Sproul says it makes sense to apply it before snow falls. “If you get a liquid layer down, then a bond won’t be able to develop, so when you’re plowing it off, it’s a lot easier,” he says. “That would have helped a lot in this last storm, if more folks had done that in the Madison area.”

In those pre-snow applications the brine dries fairly quickly, leaving behind a thin layer of dried salt which serves as a preventive measure to keep frost or ice from forming in the first place. Highway maintenance vehicles that apply the brine typically have large tanks in the back and spray units at the rear that can spray single or multiple lanes. Drivers who encounter the wet pavement after a brine application are encouraged to slow down, the same as they would if the pavement were wet from rain.