You are here: Home / Brewers / Bush gets no support

The Brewers got another solid start from right-hander Dave Bush, but the 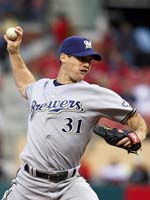 Bush allowed just 2-runs on 7-hits in 6-innings against the Braves, with both runs coming on solo home runs by Atlanta’s Martin Prado and Chipper Jones.

Corey Hart had two hits for the Brewers, including his 22nd home run of the season.  The rest of the team managed just 4-hits together.

The Brewers fell to 10-games under .500 with the loss and trail the idle Reds by 9-games.