Winter weather is affecting a big portion of the country right now and Dallas, 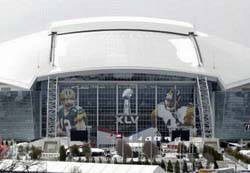 Texas, which is hosting Super Bowl 45, is no exception.

An ice storm in the Dallas area has made travel difficult.  It’s cancelled school’s and even ruined some of the Super Bowl exhibits.  And for fans trying to get to “Big D” early, Dallas-Forth Worth airport closed down for awhile.  Even when things are back to semi-normal in Dallas, the rest of the country is still having weather problems which is seeing flights cancelled every hour.

Restaurants and other retailers are losing money, although most of the fans for the game won’t start coming in until at least Thursday, which means there’s still time.

Temperatures are expected to stay around the freezing mark for the balance of the week, which means it’ll take awhile to get back to normal.

The Packers and Steelers are working indoors today and that plan could continue a bit longer as the two teams prepare for the big game on Sunday.

AUDIO: Mike Clemens says weather has been a problem as Super Bowl 45 approaches 1:07