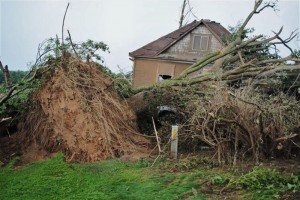 A Clark County couple feels lucky to be alive after their home was hit by an EF-2 tornado Tuesday evening. Irene and Roy Tinkey live about 10 miles west of Marshfield and were inside their house when the quick-moving storm hit at around 5:30 p.m.

Irene Tinkey says she was unloading the dishwasher when it began to rain and hail outside. All of the sudden, she says the kitchen window blew through and “all heck broke loose.”

She was blown across the kitchen into their computer room while Roy Tinkey was forced to dive from one part of the house, which was collapsing, into a bathroom.

Irene was left trapped, although her husband was eventually able to work his way through a crawl space to her location and dig her out of some debris.

Roy, whose right foot was broken in the ordeal, says he’s not the most religious man, but he thinks someone was looking out for them.

Their home was moved right off the foundation. Large trees were also uprooted and left lying on top of the house. The National Weather Service says the tornado was 200 yards wide and packed winds of 120 to 130 miles per hour.